VANCOUVER, BC / ACCESSWIRE / October 4, 2022 / Guanajuato Silver Company Ltd. (the "Company" or "GSilver") (TSXV:GSVR)(OTCQX:GSVRF) is pleased to provide an operations update highlighting the impact of additional production from the Company's recently acquired Topia and San Ignacio mines.

James Anderson, Chairman and CEO said, "Within one week of closing our latest Mexican mines acquisition, we had initiated mining of silver-rich material from San Ignacio and began transporting this material to El Cubo for processing; this rapid restart again highlights our team´s ability to swiftly and successfully restart mines and move them towards full production. In addition, production of silver-lead-zinc concentrates from our Topia mine in the State of Durango continued uninterrupted through our integration process; refinements at both the Topia mine and plant have been initiated with planned improvements expected in the months ahead."

The Company´s ongoing ramp up of production and targeted capital expenditures have had a meaningful reduction in operational cash costs at El Cubo as evidenced by the month-to-month declines in operating cash costs to a low of $12.85 per AgEq ounce in July. The introduction of additional assets into the production mix increased cash costs in August to $15.09 per AgEq ounce. The Company´s approach to cost reduction will be applied to all the new assets looking for operational cost reductions in the months ahead.

Ongoing testing and enhancements of the Company's metallurgical procedures and treatments have had a significant impact with notable month over month increases in precious metals recoveries. August silver recoveries achieved a record of 88.9%; the gold recovery for August was 85.6%.

Company engineers continue to work diligently to bring the Valenciana Mines Complex, including the Cata processing facility, back online in a timely fashion. Exact timelines for the inclusion of silver and gold production from Valenciana in the Company's production mix will be made available in a subsequent news release. 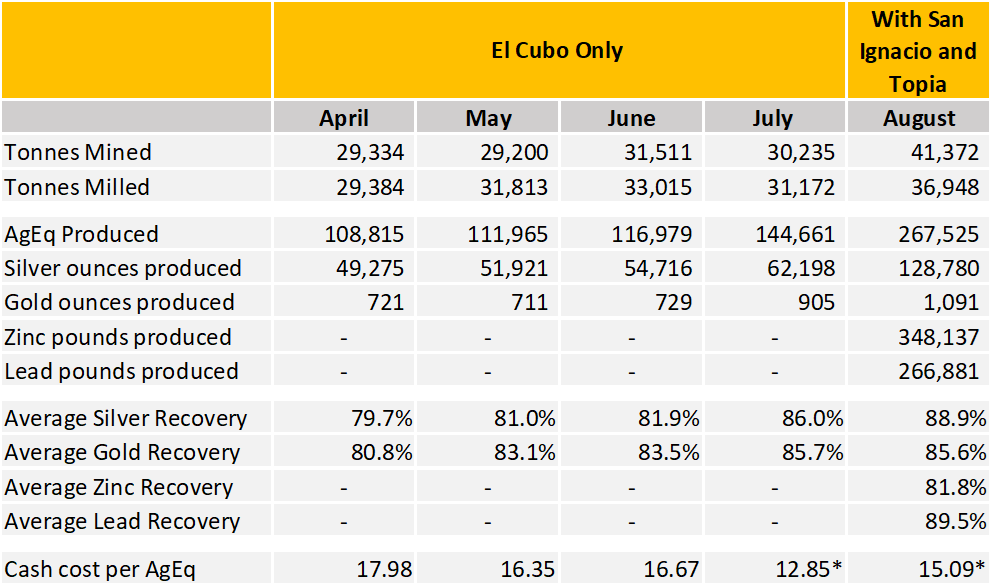 *July and August cash cost per AgEq are preliminary numbers only, subject to final adjustments to be completed and disclosed along with the Company's Q3 2022 financial results.

GSilver has adopted, subject to approval of the Company's "disinterested shareholders" and the TSX Venture Exchange (the "TSXV"), an omnibus equity compensation plan (the "Omnibus Plan") with a view to providing the Company with a range of incentive awards including restricted share units, deferred share units, performance share units and other share-based awards to attract, retain and motivate employees, officers, directors and consultants of the Company and its affiliates. The Omnibus Plan, which is in addition to the Company's existing 10% rolling stock option plan, is a "fixed" plan which reserves for issuance a maximum of 15,000,000 common shares for grants and awards to key employees, officers, directors and consultants (subject to certain limits on grants to individual participants or groups of participants as per the policies of the TSXV) who are expected to contribute to the Company's success and help achieve long-term objectives that will benefit the Company and its shareholders. "Disinterested" shareholder approval for the Omnibus Plan will be sought at GSilver's upcoming annual general meeting scheduled for October 27, 2022 (the "2022 AGM") and the full text of the Omnibus Plan is included in the Company's management information circular for the 2022 AGM filed on SEDAR.

Hernan Dorado Smith, a director and officer of GSilver and a "qualified person" as defined by National Instrument 43-101, Standards of Disclosure for Mineral Projects, has approved the scientific and technical information contained in this news release.

GSilver is a precious metals producer engaged in reactivating past producing silver and gold mines near the city of Guanajuato, Mexico, which has an established 480-year mining history. With five mines and three processing facilities, the Company is one of the fastest growing silver producers in Mexico.

ON BEHALF OF THE BOARD OF DIRECTORS

This news release contains certain forward-looking statements and information, which relate to future events or future performance including, but not limited to, the current and projected mined output from the Company's existing El Cubo and El Pinguico mines and newly acquired San Ignacio, Valenciana and Topia mines, and GSilver's anticipated performance for the balance of 2022 including anticipated year end run rate, the ability of the Company to continue to increase production, tonnage and recoveries of mineralized material at El Cubo and El Pinguico in accordance with its objectives and timetable and to mirror such performance at San Ignacio, Valenciana and Topia; the ability of the Company to increase silver and gold grades, improve metallurgical recovery rates, increase revenues, and reduce production costs (including AISC) consistent with the Company's expectations and production model, the Company's ability to restart production from the Valenciana mine complex and improve efficiency and output at the Topia mine as currently planned and the timing thereof, the Company's future development and production activities; estimates of mineral resources and mineralized material at the Company's mining projects and the accessibility, attractiveness, mineral content and metallurgical characteristics thereof; the opportunities for future exploration, development and production at the Company's mines and the proposed exploration, development and production programs therefor and the timing and costs thereof; and the success related to any future exploration, development and/or production programs.

Such forward-looking statements and information reflect management's current beliefs and are based on information currently available to and assumptions made by the Company; which assumptions, while considered reasonable by the Company, are inherently subject to significant operational, business, economic and regulatory uncertainties and contingencies. These assumptions include: our mineral resource estimates at El Cubo and El Pinguico and estimates of mineralized material at San Ignacio, Valenciana and Topia and the assumptions upon which they are based, including geotechnical and metallurgical characteristics of rock conforming to sampled results and metallurgical performance; available tonnage of mineralized material to be mined and processed; resource grades and recoveries; assumptions and discount rates being appropriately applied to production estimates; the ability of the Company to successfully integrate production from San Ignacio and Valenciana into the Company's existing mining and milling operations at El Cubo and the availability of excess processing and tailings capacity at El Cubo to accommodate same; the Company's ability to secure additional sources of mineralized material for processing, prices for silver, gold and other metals remaining as estimated; currency exchange rates remaining as estimated; availability of funds for the Company's projects and to satisfy current liabilities and obligations including debt repayments; capital, decommissioning and reclamation estimates; prices for energy inputs, labour, materials, supplies and services (including transportation) and inflation rates remaining as estimated; no labour-related disruptions; no unplanned delays or interruptions in scheduled construction and production; all necessary permits, licenses and regulatory approvals are received in a timely manner; and the ability to comply with environmental, health and safety laws. The foregoing list of assumptions is not exhaustive.

Readers are cautioned that such forward-looking statements and information are neither promises nor guarantees, and are subject to risks and uncertainties that may cause future results, level of activity, production levels, performance or achievements of GSilver to differ materially from those expected including, but not limited to, market conditions, availability of financing, currency rate fluctuations, rising inflation and interest rates, geopolitical conflicts including wars, actual results of exploration, development and production activities, actual resource grades and recoveries of silver, gold and other metals, availability of third party mineralized material for processing, unanticipated geological or structural formations and characteristics, environmental risks, future prices of gold, silver and other metals, operating risks, accidents, labor issues, equipment or personnel delays, delays in obtaining governmental or regulatory approvals and permits, inadequate insurance, and other risks in the mining industry. There are no assurances that GSilver will be able to continue to increase production, tonnage milled and recoveries rates, improve grades and reduce costs at El Cubo and/or Topia to process mineralized materials to produce silver, gold and other concentrates in the amounts, grades, recoveries, costs and timetable anticipated. In addition, GSilver's decision to process mineralized material from El Cubo, El Pinguico and its newly acquired San Ignacio, Valenciana and Topia mines is not based on a feasibility study of mineral reserves demonstrating economic and technical viability and therefore is subject to increased uncertainty and risk of failure, both economically and technically. Mineral resources and mineralized material that are not Mineral Reserves do not have demonstrated economic viability, are considered too speculative geologically to have the economic considerations applied to them, and may be materially affected by environmental, permitting, legal, title, socio-political, marketing, and other relevant issues. There are no assurances that the Company's projected production of silver, gold and other metals will be realized. In addition, there are no assurances that the Company will meet its production forecasts or generate the anticipated cash flows from operations to satisfy its scheduled debt payments or other liabilities when due or meet financial covenants to which the Company is subject or to fund its exploration programs and corporate initiatives as planned. There is also uncertainty about the continued spread and severity of COVID-19, the ongoing war in Ukraine and rising inflation and interest rates and the impact they will have on the Company's operations, supply chains, ability to access mining projects or procure equipment, contractors and other personnel on a timely basis or at all and economic activity in general. Accordingly, readers should not place undue reliance on forward-looking statements or information. All forward-looking statements and information made in this news release are qualified by these cautionary statements and those in our continuous disclosure filings available on SEDAR at www.sedar.com including the Company's interim financial statements and accompanying MD&A for the three month period ended June 30, 2022. These forward-looking statements and information are made as of the date hereof and the Company does not assume any obligation to update or revise them to reflect new events or circumstances save as required by law.