VANCOUVER, BC / ACCESSWIRE / December 1, 2022 / Electric Royalties Ltd. (TSXV:ELEC)(OTCQB:ELECF) ("Electric Royalties" or the "Company") is pleased to provide an asset update on its current royalty portfolio.

Brendan Yurik, CEO of Electric Royalties, commented: "Despite the difficult equity markets in the past six months, it has been tremendously exciting to see progress continue across our portfolio, particularly at our lithium assets. Upon forecast restart in Q1 2023, Sayona Mining's North American Lithium (NAL) operation will become Canada's only producing lithium mine; NAL will seek to integrate millfeed from the Authier project on which we have a 0.5% gross metal royalty. We acquired the Authier royalty approximately two and a half years ago and the project has advanced substantially while lithium prices have climbed1. Our other lithium royalties, Seymour Lake and Cancet, continue to show promise, and we eagerly await the Seymour Lake preliminary economic assessment targeted for Q1 2023. Having one of the largest lithium royalty portfolios in the world, we're well positioned to benefit from the strong lithium market.

"In addition, we have a strong portfolio of graphite royalties. We are very encouraged to see initial metallurgical results on the Graphite Bull (formerly Yalbra) graphite project in Australia. Metallurgy is a key technical aspect for graphite projects and the recent achievement of a 99.8% concentrate grade is testament to the potential of the project. Northern Graphite, operator of our Bissett Creek royalty, is gearing up to put the project into production as their new flagship graphite mine, targeting eventual production capacities of approximately 100,000 tonnes per year.

"Drill results from the Millennium copper-cobalt project are being targeted for follow-up in 2023. Millennium has achieved excellent metallurgical results and is in a mining district, and the planned estimate of the resource would be a very exciting development. We have seen approximately 60 development updates across 11 royalty assets in this year alone, and 2023 looks to promise many more. We believe 2023 will be a pivotal year for Electric Royalties as we target closing of our first cash-flowing tin royalty and anticipate cash flow from our first lithium royalty, thereby potentially increasing our number of paying royalties to three."

Highlights since the Company's previous update on October 13, 2022:

On November 24, 2022, Sayona announced that, regarding the restart of the NAL operation, procurement was 98% completed and permitting 96% finalized as of the end of October. NAL remains on track for recommencement of production in Q1 2023.

Sayona plans to combine mineralized material produced from Authier with mineralized material at the nearby NAL site, with a goal to facilitate improvement in plant performance and economics. A pre-feasibility study for NAL integrates Authier, on which Electric Royalties holds a 0.5% gross metal royalty, with the NAL operation into Sayona's Abitibi Lithium Hub.

On November 8, 2022, Green Technology Metals announced a new discovery at Seymour Lake, the first at the project in 50 years. The new discovery, Blue Bear, is a spodumene-bearing pegmatite located approximately 500 meters south-east of the Aubry Complex, on the Pye West Limb, and sits within the same current mine permitting and baseline study boundary (see Figure 1). 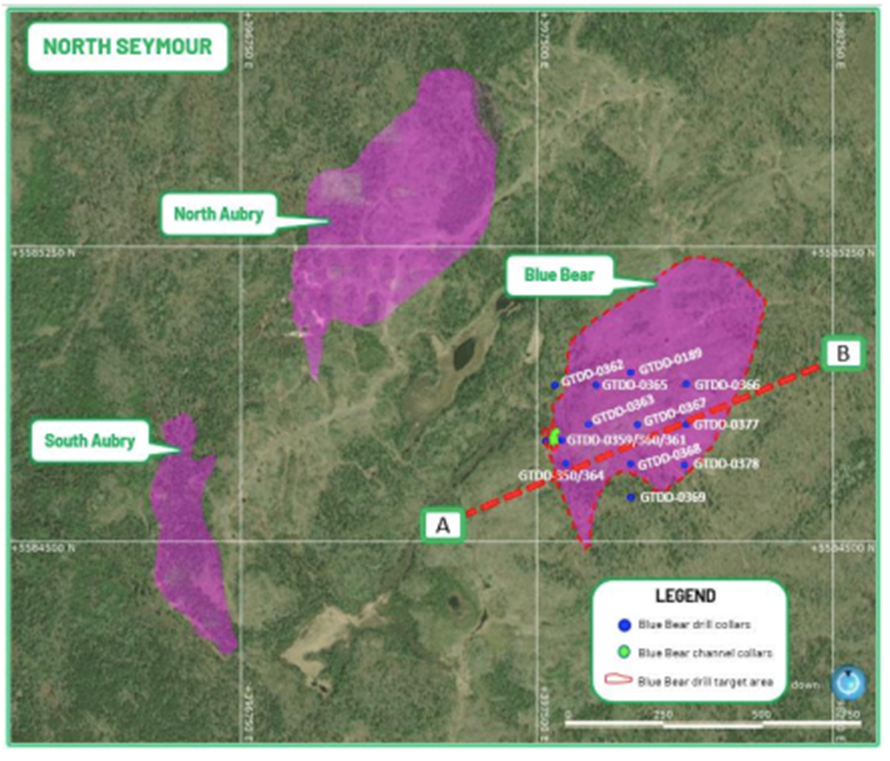 Green Technology Metals plans to rapidly delineate the scale of the Blue Bear deposit with ongoing diamond drilling and channel sampling, and test further targets in the North Seymour area. This work is expected to culminate in an updated mineral resource estimate for Seymour Lake in the coming months. Green Technology Metals also continues to progress work on the Seymour Lake preliminary economic assessment, scheduled for completion in Q1 2023.

Electric Royalties is relying on the information provided by Green Technology Metals and is unable to verify the reported drill data supporting the Blue Bear discovery.

On October 19, 2022, Winsome announced that results from detailed ground gravity surveying provided several high-priority drill targets. The customized gravity processing demonstrated a strong correspondence to the known pegmatite intercepts and suggests the main Cancet pegmatite could extend beyond existing drilling over 700 meters to the east. Furthermore, a similar untested 1,100-meter-long feature lies approximately 200 meters to the north of the existing pegmatite intercepts. Applications for approval to drill the newly identified targets will be submitted shortly and it is expected that they will be drilled early in 2023 once the current drill program has concluded.

Electric Royalties is relying on the information provided by Winsome and is unable to verify the reported exploration data.

On November 15, 2022, Winsome announced a A$6.8 million capital raise to partially fund exploration at Cancet.

Metal Bank is planning further work programs for 2023 to identify additional mineralized structures in the Fountain Range/Quamby Fault Zone area of interest along with the potential for genetic links to the Millennium cobalt-copper-gold mineralization.

Electric Royalties is relying on the information provided by Metal Bank and is unable to verify the reported drill data.

An infill and extensional drill program commencing as soon as geophysical and heritage surveys are concluded with the aim to upgrade confidence in, and expand, the deposit and obtain further metallurgical samples. Geotechnical, groundwater and other technical, environmental and permitting investigations will also be progressed.

Electric Royalties is relying on the information provided by Buxton and is unable to verify the reported metallurgical data.

Northern Graphite is also advancing its strategy of upgrading mine concentrate into anode material for the lithium-ion battery and electric vehicle markets. Ongoing testing of graphite both internally and by potential partners, continues to demonstrate that they are ideally suited for battery applications in terms of milling, shaping, purification, coating and electrochemical properties.

In addition to the battery materials market, Northern Graphite has continued to expand its presence in other downstream segments through its existing customer base, focused on graphene applications and the use of graphite to provide enhanced thermal and electrical properties in a variety of high-value composite applications. Northern Graphite is investing in these new downstream markets to strengthen its position as the only graphite producer in North America, with Bissett Creek planned as a source of continued production growth in the future.

Closing shall occur no later than February 7, 2023 and shall be subject to certain conditions set out in Newfoundland Discovery's November 16 news release.

The closing of the transaction is subject to the satisfaction of the certain conditions set out in Newfoundland Discovery's November 2 news release.

David Gaunt, P.Geo., a qualified person who is not independent of Electric Royalties, has reviewed and approved the technical information in this release.

About Electric Royalties Ltd.
Electric Royalties is a royalty company established to take advantage of the demand for a wide range of commodities (lithium, vanadium, manganese, tin, graphite, cobalt, nickel, zinc and copper) that will benefit from the drive toward electrification of a variety of consumer products: cars, rechargeable batteries, large scale energy storage, renewable energy generation and other applications.

Electric vehicle sales, battery production capacity and renewable energy generation are slated to increase significantly over the next several years and with it, the demand for these targeted commodities. This creates a unique opportunity to invest in and acquire royalties over the mines and projects that will supply the materials needed to fuel the electric revolution.

Electric Royalties has a growing revenue-generating portfolio of 21 royalties, with one royalty currently subject to closing. The Company is focused predominantly on acquiring royalties on advanced stage and operating projects to build a diversified portfolio located in jurisdictions with low geopolitical risk, which offers investors exposure to the clean energy transition via the underlying commodities required to rebuild the global infrastructure over the next several decades towards a decarbonized global economy.

Cautionary Statements Regarding Forward-Looking Information and Other Company Information

This news release includes forward-looking information and forward-looking statements (collectively, "forward-looking information") with respect to the Company within the meaning of Canadian securities laws. This news release includes information regarding other companies and projects owned by such other companies in which the Company holds a royalty interest, based on previously disclosed public information disclosed by those companies and the Company is not responsible for the accuracy of that information, and that all information provided herein is subject to this Cautionary Statement Regarding Forward-Looking Information and Other Company Information. Forward looking information is typically identified by words such as: believe, expect, anticipate, intend, estimate, postulate and similar expressions, or are those, which, by their nature, refer to future events. This information represents predictions and actual events or results may differ materially. Forward-looking information may relate to the Company's future outlook and anticipated events and may include statements regarding the financial results, future financial position, expected growth of cash flows, business strategy, budgets, projected costs, projected capital expenditures, taxes, plans, objectives, industry trends and growth opportunities of the Company and the projects in which it holds royalty interests.

While management considers these assumptions to be reasonable, based on information available, they may prove to be incorrect. Forward-looking statements involve known and unknown risks, uncertainties and other factors which may cause the actual results, performance or achievements of the Company or these projects to be materially different from any future results, performance or achievements expressed or implied by the forward-looking statements. These risks, uncertainties and other factors include, but are not limited to risks associated with general economic conditions; adverse industry events; marketing costs; loss of markets; future legislative and regulatory developments involving the renewable energy industry; inability to access sufficient capital from internal and external sources, and/or inability to access sufficient capital on favourable terms; the mining industry generally, the Covid-19 pandemic, recent market volatility, income tax and regulatory matters; the ability of the Company or the owners of these projects to implement their business strategies including expansion plans; competition; currency and interest rate fluctuations, and the other risks.

The reader is referred to the Company's most recent filings on SEDAR as well as other information filed with the OTC Markets for a more complete discussion of all applicable risk factors and their potential effects, copies of which may be accessed through the Company's profile page at www.sedar.com and at otcmarkets.com.

CORRECTION FROM SOURCE; Electric Royalties To Acquire 0.75% GRR on...

CORRECTION FROM SOURCE: Electric Royalties to Acquire 0.75% GRR on...

Electric Royalties to Acquire 0.75% GRR on Producing Tin-Tantalum Mine in...